Everyone keeps telling me I shouldn’t walk around naked,
but I was just going to Riverwood real quick to buy some building
materials and I needed to be able to carry as much as possible!
Then a dragon came and interrupted my shopping… But a
true dragonborn can kill dragons even
in the nude x)) *Moahaha* 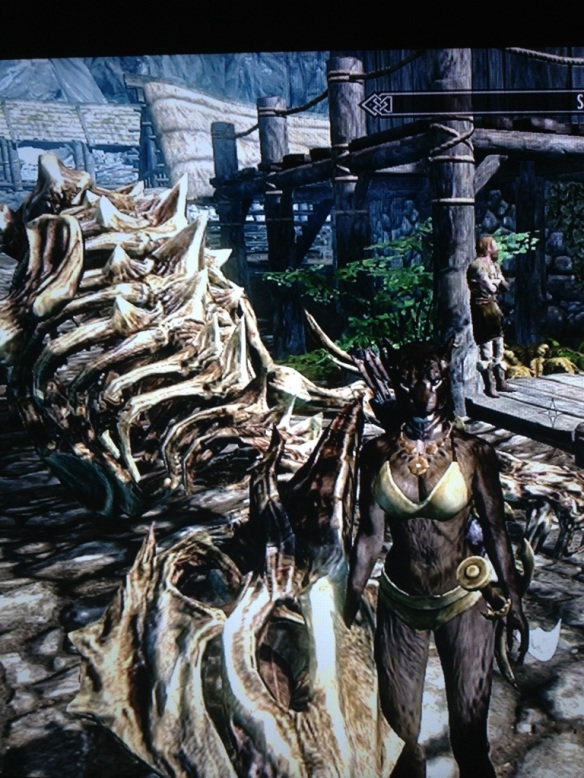 The other day my sister forced me to try a game and i’m
happy she did! (Thanks sis) ^^ It was an indie game called EVOLAND!

Evoland is a short game about the evolution of adventure/RPG
games! It starts off as a very simple game boy irsh looking game
and as you play it evolves more and more.

Better graphics, improved controlls and music is added
gradually and also new innovations from back in the days. A few
examples is 16-bit graphics, shadows and inclusion of volumetric
lighting that really gave the games some depth, npc’s, dungeons,
items, an inventory, health containers, random encounters, bosses
and so on.. After you play evoland for a while it looks like this..

The game has gotten alot of inspiration from Zelda and
Final Fantasy and a true blue gamer will recognise most of the
references to other legendary titels as well which is spread
throughout Evoland! The story line is very simple (but it’s
supposed to be simple) and the style of the game is well known, but
it still has a certain charm to play the game and see it transform
before your eyes 🙂 Starting off as an game boy style rpg to
becoming a more advanced diablo style game! The only annoying thing
about this game is the random encounters (hehe) but i’ve been a big
FF nerd for many years back so i guess i’m used to it ^^ The idea
for Evoland was created by Nicolas Cannasse for Ludum Dare #24. For
you who don’t know it it’s a competition where you are supposed to
create the best game you can in a set time, under 48h. Nicolas
created Evoland Classic and he won the whole thing, with 1400 games
competing. The game soon got a big fan base with over 30 0000
players who had played the game over the first few months after
it’s release. If you want to try Evoland Classic you can do so
here! The full version of Evoland can
be bought from steam for like 9 dollars and I think it’s definitely
worth it! It’s a charming little game full of nostalgia and only
takes about 3-4 hours to play! I recomend it! 😀

And Gustaf is guarding his mommy's psp while she plays ps3 ^^ That's so nice of him! ❤

Gustaf was recently featured in PlayStation Blog’s gamer cat week to celebrate the release of Stray! How awesome is that!? 😍😸❤️ Pictures of all the kitties at @playstation ‘s instagram!