I had a blast this weekend! We went to Gothenburg to go to RSM, a retro game convention and probably as close to nerd heaven on earth you can get! ❤ Tons of games, tons of people and tons of fun! In this post I'm gonna show you what I bought! 😀 I always start saving for RSM the day after the con basically, just alittle here and there to make sure I can go each year. This year I did not go as crazy with the shopping as last year, I had a budget and I only went alittle above it! 😀 Here is what I got:

This was really cool, it’s the press-release version of Fairytale Fights for ps3, and it looks like a book! 😀 I also got a new screen for my Game Boy, a Zelda Iphone shell and A FREE BATMAN! 😀 ❤ Yay! Haha

Even though I don’t have a C64 yet I just had to buy these two games, the fronts were just priceless so I had to have them! The I.Ball dude kind of looks like batman right?? I mean the design of him, exept from the fact that he is a ball! He even have the same crooked half smile! And this mermaid was just so….. wow! The look on that poor divers face, pure panic! xD I also got YOSHI SLIPPERS and Rush n’ Attack for nes! ^^

I also found some Vectrex games! The Armor Attack + overlay my sister sneaked off and got for me and then hid in my bags! I was so scared when I found it when I was unpacking later, for a few seconds I thought I had accidentally stolen it! xD Haha! Thank you again sis! <3<3<3<3<3

And here we have the traditional gaming themed head wear I have gotten each year so far on RSM! This year I got a Mario beanie! 😀 I also found inFamous: First Light REALLY cheap! 😀 I added 2 gaming cups to my collection and Tetris coockie cutters!

I also bought 2 Sega Megadrive games, Lemmings 2: The Tribes and Zoop! I have no idea what Zoop is, some kind of puzzle game it seems. I was just really drawn to the front! 🙂 I also got some japanese Gameboy games, Hamtaro something, “another random game with a hamster” 1 and 2, Kirby’s Dreamland and something I’m guessing might be a cooking game! xD The awesome Likilato was also at RSM and he was selling games at the Söders Spel & Skivhandel booth! After I did some shopping at his booth I got to choose a game for free in his loot box, I went with Stuart Little 2 for Ps1! Thank you again Likilato! ^^

This year I bought alot of games that I felt was visually beautiful or funny, I took a dive in a Snes box and found alot of cool looking games, the two most beautiful was definetly Romancing Saga 2 and 3! The japanese really have a talent for making stunning game fronts! The game to the right of them I have no idea what it is but it looked cool! xD I also got Tetris, some other “pretty front game” and the game with the boys on the front I bought because Seb said it was fun! 😀 I bought Titan just because the guy on the front was so funny! That facial expression is so awesome! xD And all dressed in what looks like some kind of latex suit! And of course… EXPLOTIONS! This game must be packed with action judging by the front! Haha! xD All these games I got at the retrospel.se booth! If you are swedish check out their online store! 😀

I’m very happy with my shopping this year, I met alot of very nice sellers and got some great deals! Thank you so much! <3<3<3

The cats were very happy when we came home, Gin became a “Gin-sticker” and stayed as close to me as he could until he finally purred me to sleep! That’s why I’m posting this blog post one day late, I had written about half of it when his superpower was too much for me and I just fell asleep! He is a grey fluffy little Jigglypuff! xD I did however manage to try one of my new tea cups before I was in dream land! ^^

Oh! Btw, did you spot all the batmans? He is hiding in every picture :)))

What a great weekend I’ve had! It was such a great con this year! 😀 The 8 h drive was SO worth it! I’m currently sittning in the car on my way home and most of the pictures are on the camera so all I can do is give you guys a sneaky peak and I’ll do a bigger RSM post later! 🙂

(Photo by my friend Jon) This is little more than half of the RSM hall, the other side was packed with people too! :O

My tradition of always buying a game themed head wear lives on! I got this awesome Mario beanie! ❤ And of course a RSM t-shirt! 😀

I got some awesome loot too (and a free Batman)! But the loot I will show you guys later! 😀 *hugs*

Omg this weekend was so much fun even though everyting did not exactly go as planned! x) We arrived in Gothenburg really late the day before, so we didn’t get much sleep, we had a cosplay emergency that needed to be taken care of before we could even go to the convention and there was a 2 hour wait in line before we even got in! x( At least we saw some awesome cosplayers while waiting and there was a Mario walking around giving people hugs! ^^ It’s not everyday you get to hug your childhood hero so of course I had to capture this opportunity! xD haha!

This guy cosplaying wheatley from portal was great! So hilarious! xD Check out his DeviantArt if you want to see more! ^^

My friend as Zack Fair from Final Fantasy 7! Check out his Instagram if you want to see more of him! ^^

When we finally got in it was awesome!! Alot bigger than last year and soooooo much people! There was so much stuff to look at, I was so busy browsing I totally forgot abot taking pictures, so I only have a few from inside!

My brother and his daughter came with us to check out the con! ^^ She is such a sweetheart! She also bought some games! ^^

I got to meet these two too! Such nice guys working at a game store called Spel och Sånt here in sweden! ^^

The amazing Charles Martinet was at RSM this year! He is the man behind the voice of Super Mario, Paarthurnax from Skyrim etc. What an great guy! He had such energy and he was suuuper nice! He was at the con the whole day signing autographs and talking to fans! ^^

And last but not least… I’ll show you my loot! 😀

My autographs from Charles Martinet! (He gave me one extra because I was so nervous I forgot to tell him the card was supposed to be for my sister x) So I got 3 in total!)

This is a press kit of Assassins Creed! With a beautiful metal box witch will look awesome in my AC shelf! ^^

My brother bought these two for me! ^^ (THANK YOU) The reason he got me the Xbox Live is, and I quote “Now you have no exuse, buy Dark Souls 2 and play with me online” I guess you are right big brother Haha! x)

This is Odama for Game Cube (Japanese) Such a pretty box! :O

Last year I bought a Link hat at RSM so I thought I would keep the tradition going by buying a new fun hat! So I got a Mario hat this time! ^^

I hesitated a bit because of the pricetag but after really thinking about it I knew I would hate myself if I didn’t buy it! After all I’ve been looking for it for yeeeears! And this one is in super good condition with nothing missing! And this in a way completes my FF collection! Yaaay! ^^ (At least from one end, they will probably never stop releasing them) Haha! Wow! This post got long! Sorry about that! xD Hope you liked it anyway! **Hugs** 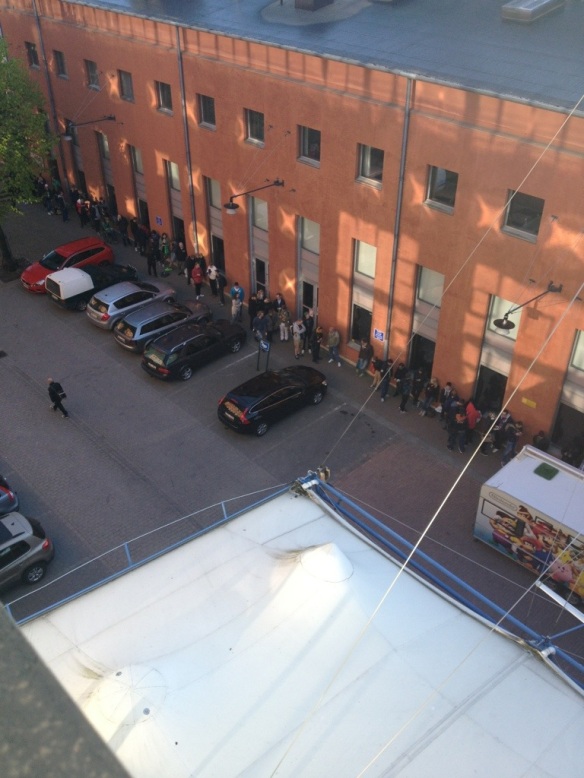 After a 8 hour drive we arrived at our destination! 😀 Gothenburg! We got here pretty late, at like 9pm. And the first thing that happens, before we even check into the hotel, is that one of Sweden’s most popular game-bloggers came right up and talked to me! :O ((It’s so weird to talk to people IRL whos blog you followed for yeaaars!)) My swedish readers probably knows them… GamingGrannar! 😀 (I love your blog guys, you are all really awesome!) I was so tired after the long drive, exited and suprised all at the same time.. So sorry DAVE, I also get really nervous when talking to new pepole! x)) Hehe!

And like 3 minutes after that another really cool thing happened! We got our room keys and stepped into the elevator, and this guy in the elevator said he remembered me.. from GameX.. two years ago! :O When I was cosplaying an assassin! That is amazing! You sir have a really impressive memory! ^^

Now I really should get some sleep. I can’t wait until tomorrow! RSM!!! It’s gonna be sooo much fun! 😀 Good night guys! ^^